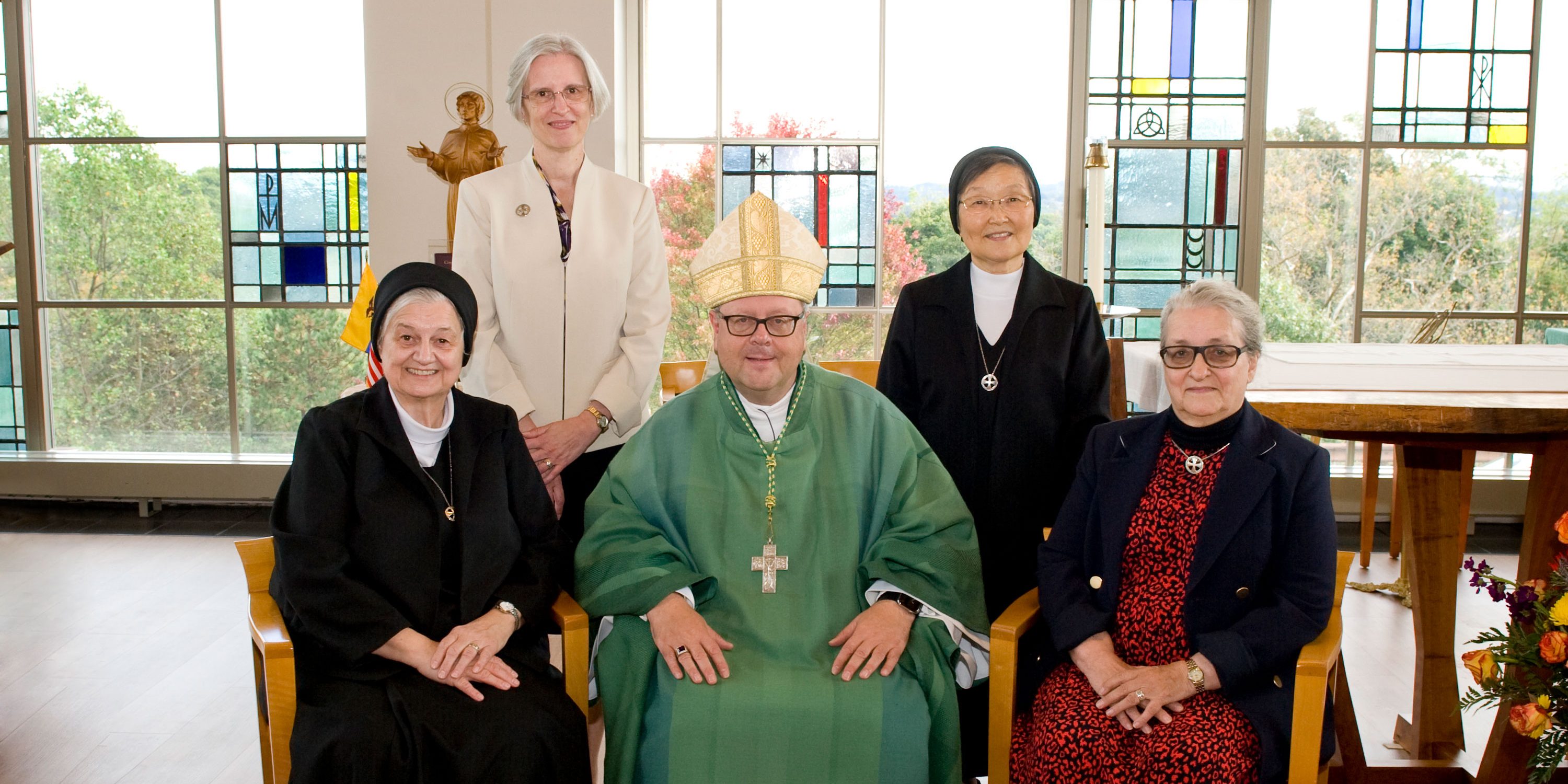 The Sisters of Charity of Seton Hill announce the installation of the congregation’s 2019-2024 General Council, elected during General Chapter meetings held at the sisters’ motherhouse, Caritas Christi, last July. The new General Council will administer and direct the mission of the 343 members of the congregation, with 145 sisters ministering in the United States Province and 198 sisters ministering in the Korean Province.

Members of both the United States and Korean Provinces gathered on Sunday, October 13, 2019, at Caritas Christi, the congregation’s motherhouse, to witness the Rite of Installation of the new General Council at a special Eucharistic Liturgy. The Most Reverend Edward C. Malesic, JCL, Bishop of the Diocese of Greensburg, was the main celebrant and homilist at the Installation Mass attended by over 200 guests, including Sisters of Charity, family, friends, and visiting clergy. The newly elected General Superior, Sister Jane Ann Cherubin, also offered a reflection at the end of the liturgy, challenging the congregation to move beyond frontiers to witness charity and justice to our wounded world. Click here to read Sister Jane Ann’s reflection.

Sister Jane Ann was a licensed practical nurse and earned a BA in social welfare from Seton Hill University and an MEd with emphasis on special education from the University of Southern California. In the early years of her religious life in Western Pennsylvania, Sister Jane Ann Cherubin taught at Saint Edward School (Herminie), Saint Paul School (Greensburg), and Resurrection School (Brookline). She ministered on the nursing staffs at Shadyside Hospital, the former Pittsburgh Hospital, and the Sisters of Charity former retirement home and infirmary, Assumption Hall, Greensburg. Sister Jane Ann was later employed as a case worker by the Pennsylvania Association for Retarded Citizens, Greensburg.

In 1976, Sister Jane Ann was missioned to Korea. After completing language studies, she helped to establish the Seton Early Education Center and Infant Toddler Program for Children with Disabilities as well as Eunhae School for children who are physically challenged. She was elected to the Provincial Council of the Korean Province and was the Director of Development for the Sisters of Charity in Korea. Most recently Sister Jane Ann has served as the Interprovincial Director of Development and Coordinator of Mission Support. Sister Jane Ann will lead the congregation in living its Charism of Charity more deeply over the next five years.

Sister Carole Marie Blazina will serve her second term as First Councilor. A healthcare provider who has served in nursing management and in private practice as a family nurse practitioner, Sister Carole also ministered as director of novices for the United States Province and the co-director of the Seton Spirituality Center, Chicago, Illinois. Sister Carole’s graduate degrees include MA Pastoral Studies and MSN Family Nurse Practitioner. She currently ministers at Sto-Rox Family Health Center and serves on the executive committee of the Ladies of Charity Caregiving National Board. Previously Sister Carole served as Clinical Director of Catholic Charities Free Health Care Center, Pittsburgh; Sister Moderator of the Association of the Ladies of Charity, Diocese of Pittsburgh; and member of the Advisory Board of Carlow University School of Nursing, Pittsburgh.

Sister Kwangshim Oh is the new Second Councilor. She earned an MA Theology from Franciscan Theology School of the Graduate Theological Union, Berkley, California. Her apostolic career included ministry in South Korea as a teacher and office manager at Saint Joseph Girls’ High School, Gangjin, and pastoral ministry in Youndong Parish in Gwangju Diocese. Sister Kwangshim was missioned in Chicago, Illinois, where she ministered at the Korean Catholic Church. She served the congregation as the Supervisor of Building and Construction of the Korean Province, the Director of the Development Office of the Korean Province, and the Assistant of US Property Management. Sister Kwangshim currently serves as the Assistant Sister Servant at Caritas Christi, the motherhouse of the Sisters of Charity.

Sister Maria Goetschalckx, Third General Councilor, holds a MS with a concentration in physical chemistry from the University of Virginia and a JD from the City University of New York. She is admitted to the bar in Pennsylvania and New York and has been employed in the field of immigration law since 1992, with a year sabbatical teaching English alongside Sisters of the Korean Province in Gangjin, South Korea. In Western Pennsylvania, she served on the chemistry faculties of Greensburg Central Catholic High School, Lawrenceville Catholic High School, Seton Hill University, and Saint Vincent College. Sister Maria served the congregation as the Peace and Justice Coordinator for three years.