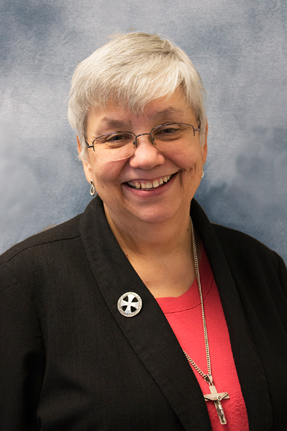 Fifty years ago, when she made the decision to say “Yes” to living a vowed religious life, Sister of Charity Jeanne Bartholomeaux had no idea where it would lead her. “I never thought that I would be an artist. As a Sister of Charity, I was encouraged to study art and practice it in my ministry, first as an art educator and then as a fiber artist,” recalled Sister Jeanne. “When my ministry led me to other forms of service, I found that I continued to create environment––inviting others into an encounter with the Divine. In the classroom, in an office, in a woven or stitched piece of art, my hope is that God will be present there. For me, that is how the Charity of Christ urges me.”
Sister Jeanne entered the Sisters of Charity from Saint Francis Cabrini Parish, Diocese of Tucson, Arizona. Her current ministry is in her home diocese where she serves as the Vicar of Vowed Religious, a position she has held for two years. In this capacity, she supports Bishop Kicanas in his canonical obligations and assists and supports consecrated men and women as they offer their witness and service in the many spiritual and pastoral initiatives of the diocese. She serves as the bishop’s delegate and represents vowed religious of the diocese by attendance at diocesan and national gatherings to dialogue on issues affecting their religious life and ministries.
In addition to her work for her diocese, Sister Jeanne is in her second tenure of eight years at Salpointe Catholic High School, Tucson, where she teaches freshman theology. She has spent 20 cumulative years of her 31-year ministry as an art and theology teacher at Salpointe Catholic. Sister Jeanne has also taught in the Dioceses of Phoenix and Pittsburgh and served as a religious education coordinator for the bilingual parishes of Saint Catherine of Sienna, South Phoenix, and Korean Martyrs, Chicago. In 2010, she participated with sisters from the United States and Korean Provinces of the Sisters of Charity in the inaugural Interprovincial Experience of Charism and Mission in Chicago and Ecuador.
Sister Jeanne earned a B.A. in art education at Seton Hill College, Greensburg; an M.A. in art education at Arizona State University; and an M.F.A. in fiber arts at Arizona State University. For 10 years, Sister Jeanne worked and studied as a fiber artists and has exhibited her work at various Arizona galleries. One tapestry she crafted is displayed at the Sky Harbor Airport Chapel in Phoenix. “I think about art as a way to talk to people through the creative process––to take people to places they can’t reach in any other way.’ Her latest series of embroideries, “Hearts Marked by the Blood of the Lamb,” is dedicated to those who endure redemptive suffering. The pieces are about survival of the spirit.
In 2002, Sister Jeanne was called to serve her community after a major restructuring of the congregation into two provinces. She was elected to the first General Council to serve as administrators for the Korean and the United States Provinces of the Sisters of Charity of Seton Hill. She served a six-year term as a general councilor for the congregation at Seton House International, Chicago.
“The decision to follow the Spirit of Charity as a Sister of Charity of Seton Hill has led me through a succession of challenges and grace, guiding me to varieties of places where the service of God’s people was also an invitation to education in classrooms, to production of fine arts, and to a ministry of presence,” reflected Sister Jeanne. “My life as a Sister of Charity of Seton Hill has been a response to our community motto, ‘the Charity of Christ urges us.’ It has impelled me to love and serve and be present.”

If you would like to make a donation in honor of  Sister Jeanne’s Jubilee, please click on the Donate Now button below.