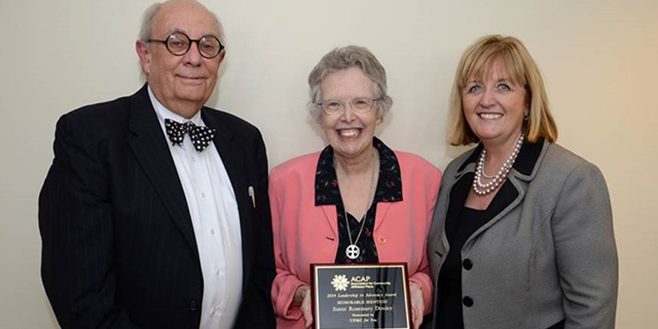 Sister Rosemary Donley, PhD, APRN, FAAN, was the recent recipient of the Leadership in Advocacy Honorable Mention Award from the Association for Community Affiliated Plans (ACAP), presented in recognition of her advocacy for vulnerable populations and low-income health programs that provide care for them. Sister Rosemary currently serves as Professor of Nursing at Duquesne University where she holds the Jacques Laval Endowed Chair in Justice for Vulnerable Populations. “My job [as Laval Chair] is to call attention to the vulnerable populations in Allegheny County who are seldom seen,” said Sister Rosemary. “I try to give them a face, because you cannot understand a person or his or her situation until you see his or her face.”

Duquesne University spokesperson Rosemary Ravasio reported that in addition to the May 7 award presented by ACAP, Sister Rosemary was honored with an invitation to attend the ACAP’s June CEO Summit in Washington, D.C.  “An invitation-only event, the summit brings together chief executive officers of Medicaid-focused health plans and senior staff to discuss current issues facing Medicaid managed care in the post-Affordable Care Act environment,” explained Ravasio. “Through her work as the Laval Chair, Sister Donley focuses her energies on spearheading the School of Nursing’s community service efforts to provide healthcare services to vulnerable populations.” Enthusiastic about the summit invitation, Sister Rosemary said, “I will get to learn firsthand how we can help our vulnerable populations get access to healthcare through the Affordable Care Act. It’s an issue that no one has really discussed, and I will be there in person to hear these conversations and be able to then bring this insight back to our students at Duquesne.”

A champion for social justice, Sister Rosemary has also been responsible for coordinating the Rita M. McGinley Symposium, which is held annually at Duquesne University. The event examines issues that have included needs of the elderly, immigrants, veterans, and children. “Faces of Mental Illness” is the topic for the next symposium scheduled for October 23 and 24.

In the featured photo Sister Rosemary Donley (center) is pictured with John Lovelace, president of UPMC for You, and Dr. Mary Ellen Glasgow, dean of Duquesne University School of Nursing.

For more about Sister Rosemary from the Tribune Review go to http://triblive.com/news/allegheny/6067496-74/justice-nursing-university#axzz33VX1iAF0.