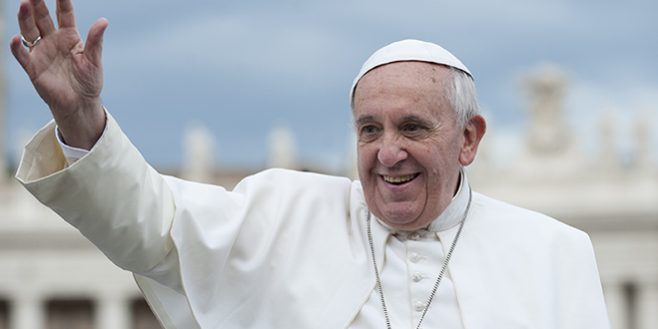 On behalf of the Marketing and Operations Director Scott Dugan of the National Shrine of Saint Elizabeth Ann Seton, Executive Assistant  Tina Heffner provided the following report of the September 23 meeting of President Barack Obama and His Holiness Pope Francis at the White House.

From the National Shrine of Elizabeth Ann Seton:

President Barack Obama welcomed His Holiness Pope Francis to the White House, and gave him a historic gift from The National Shrine of Saint Elizabeth Ann Seton. The President presented The Holy Father with the original 1809 key to Mother Seton’s first home here in Emmitsburg, the Stone House. It is one of two original keys to the Stone House from the Archives of The Daughters of Charity, Province of Saint Louise. Sister Louise Gallahue and her Council donated the key for the purpose of this gift. . . . The key once opened the door of her home, the Stone House, in Emmitsburg, Maryland, on the grounds of The National Shrine of Saint Elizabeth Ann Seton.

The simple key was presented in an ornate case crafted especially for the occasion. Understandably, the White House held this news in strictest confidence until the presentation this morning. Presented in a case crafted specifically for the occasion, the key honors both His Holiness Pope Francis, and Saint Elizabeth Ann Seton. “This gift is a fitting tribute,” said Rob Judge, Executive Director of The National Shrine of Saint Elizabeth Ann Seton, “to a woman who opened doors for so many women to serve the poor, and for a man who has been a strong advocate for those who are poor and marginalized.”

“It is humbling,” said Judge, “to know that Pope Francis literally holds the key to Mother Seton’s home, where we welcome tens of thousands of visitors every year. People of all faiths are drawn here to learn the story of her life and legacy.”

Elizabeth Ann Seton was born in 1774 in New York and died in 1821 in Emmitsburg, Maryland. She was a wife, mother of five, widow, and teacher. The school she began in Emmitsburg in 1810 was the seed of the Catholic School system of today. People identify with her because of the full life she lived and her legacy of education and service to the poor that lives on today.

In 1809, Seton founded the Sisters of Charity of St. Joseph, the first community of women religious established in the United States. Her communities of sisters grew quickly and spread from Maryland throughout the U.S., Canada and beyond, responding to the urgent needs of her day. More than 200 years later, thousands of sisters, including the Sisters of Charity of Seton Hill, serve the poor all around the world.

It is fitting that this gift was given during The Year of Consecrated Life since Mother Seton founded the first new community of women religious to be established in the United States. Elizabeth Seton opened many doors in her lifetime and opened the way for women religious to serve those in need. Like Mother Seton, Pope Francis continues to open doors as a strong advocate for those who are poor and marginalized.