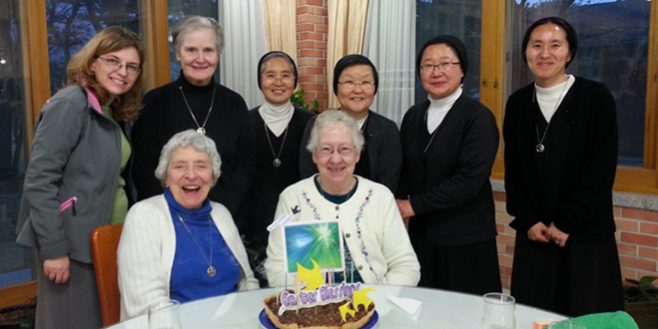 Most of us when we hear the word “chapter” think of a division or a part of a book. “Chapter,” a term used in canon law within the Catholic Church and applied to a religious community, refers to the highest governing body of a religious congregation. The Sisters of Charity of Seton Hill will convoke a General Chapter in South Korea from July 27 to August 6, 2014.  In terms of the Sisters of Charity, our Constitutions say that “the General Chapter is a representative assembly of elected and ex-officio members, and when in session, exercises the highest extraordinary authority in the congregation.” Its role is to consider our life and mission, to protect our patrimony or heritage and to promote suitable renewal in light of the needs of the Church and the world in which we live. In our congregation, the General Chapter meets every five or six years depending on the length of the term of the General Superior and Council. “Why in Korea?” you might ask. The Seton Hill Sisters have two regional groups, known as Provinces, one in the United States and one in South Korea. The location of the General Chapter meeting alternates between these two locations so that the Sisters who compose the Chapter might have a better understanding of the culture, the geographic location and the customs of each country and have an opportunity to meet a larger number of the Sisters who are native to that Province. Your prayers will help us to make wise decisions about the structure and future direction of the congregation. We have been using (in part) this prayer throughout this year in preparation for the Chapter:

“Grasp our imagination, give us new vision, dare us to hazard what lies hidden, and encourage our reluctant hearts. Help us to hear your Spirit’s direction and risk turning our boats away from the familiar to plunge into uncharted waters.”

Please pray with us that we will be open to the Spirit’s guidance.