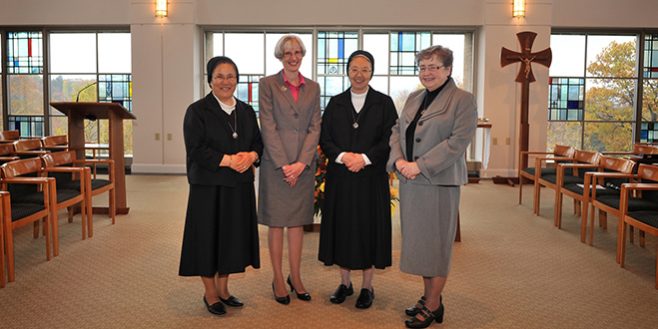 The Sisters of Charity of Seton Hill announce the installation of the congregation’s 2014-2019 General Council, elected at General Chapter meetings held in South Korea, July 27-August 6, 2014. The new General Council will administer and direct the mission of the 389 members of the congregation, with 186 sisters ministering in the United States Province and 203 sisters ministering in the Korean Province.

Members of both the United States and Korean Provinces gathered on Saturday, November 1, at Caritas Christi, the congregation’s motherhouse, to witness the Rite of Installation of the new General Council at a special Eucharistic Liturgy. The Most Reverend Lawrence E. Brandt, JCD, PhD, Bishop of the Diocese of Greensburg, was the presiding celebrant and homilist at the Liturgy, attended by 235 guests, including Sisters of Charity, family, friends, and visiting clergy.

Sister Carole M. Blazina was elected First Councilor. A healthcare provider who has served in nursing management and in private practice as a family nurse practitioner, Sister Carole also ministered as director of novices for the United States Province from 1998-2006 and co-director of the Seton Spirituality Center, Chicago, IL, from 2007-2008. Most recently, she served as Clinical Director of Catholic Charities Free Health Care Center, Pittsburgh; Sister Moderator of the Association of the Ladies of Charity, Diocese of Pittsburgh; and member of the Advisory Board of Carlow University School of Nursing, Pittsburgh.

Sister Seon Ja Lee is the new Second Councilor. Her apostolic career included pastoral ministry in Yundong, Korea, Chicago, IL, and Phoenix, AZ. She also served in Korea as a religion teacher at Saint Joseph Girls’ High School and Assistant of the Congregational Development Office. The Korean Province elected her to the office of Provincial Councilor in 1998 and to the office of Provincial Superior in 2002. Since 2006, Sister Seon Ja has ministered as a counselor and has served as the director of both the Korean Catholic Counseling Center and the Seton Spirituality Center, Seoul.

Sister Mary Jo Mutschler, Third General Councilor, is a noted educator with roles that include teacher, middle school principal, mathematics curriculum director, elementary school principal, and educational consultant for the Dioceses of Pittsburgh and Greensburg. Sister Mary Jo was the director of the Greco Institute, Shreveport, LA, and was an adjunct professor at Fordham and Loyola Universities. From 1989-1997, Sister Mary Jo served the Sisters of Charity of Seton Hill as Councilor for Mission and Ministry.