100 Years Later, the Excellence Lives On!

In its early years until 1928 and again from 1946 to 1949, the high school was coeducational. For most of its existence however, the school was conducted only for young women. One driving force behind the school’s success in its early days was its Principal, Sister Borgia Casey. Her leadership gave a firm foundation to the school. Mother M. Claudia recalls their time together in a letter to Sister Borgia’s sister:

“We were together there when the high school opened and saw it through its first ten years or more. Sister Borgia established the good traditions and standards of scholarship that gave the school its good name from the first. None of our dreams then envisioned the Sacred Heart High School that this year (1957) enrolls 816 girls.”
(Letter of November 30, 1957 to Miss Elizabeth Casey). 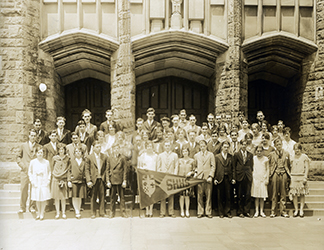 Mother Claudia also recalls the somewhat primitive conditions in the early days as she recounts a story told by Sister Borgia:

“Some of the classes had to meet in the open hall with rather makeshift appointments. One class of eight or ten boys recited at a table made of two horses and a removable top. One afternoon a student shifted his position and almost knocked the table over. He looked up and said, “See, Sister, with just a movement of my knees I could overthrow the whole academic department.”

Sacred Heart High School underwent many transformations in its physical appearance! It started its life in the grade school building and during the 30s and 40s “was housed in an eight-room brown clapboard building with a shingle roof and white window frames. . . . [The building] was sometimes called ‘the Ark.’. . . In 1947, the high school took over five classrooms and an office on the second floor of the new grade school building.” (The Sisters of Charity of Seton Hill, Volume II, p. 110). 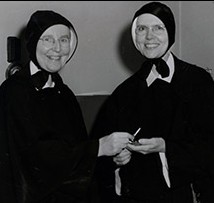 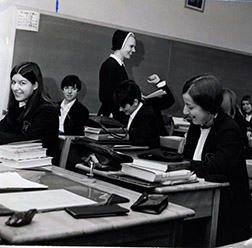 When the second volume of the congregational history was in preparation, sisters who taught in various high schools were asked to send memories of their experiences to the committee that was writing the text. Sisters who taught at Sacred Heart High School over the years recalled that the school had an excellent and diverse student body. There was a lively spirit, a solid Catholic foundation to the academic program, a fine rapport of cooperation between faculty and students, and many and varied activities and opportunities for student growth and involvement. Sister Brigid Marie Grandey, author of the History Book article on the high schools, summarized it all in her description: 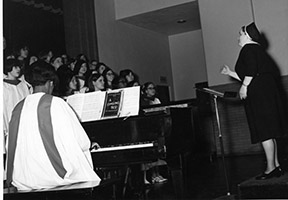 “From its beginning, Sacred Heart High School maintained a strong, living tradition of academic excellence. The Scrivener, the school newspaper begun in 1943, won numerous awards. Forensics and debate also brought trophies to the school. Plays were performed and, in later years, Sacred Heart students were cast members in nearby Central Catholic High School‘s musicals. There was a strong business program during the years when many young women entered the business world right after graduation. Large group instruction, team teaching, mechanical drawing, AP (advanced placement) classes, and Russian were all in place at Sacred Heart before they appeared in many other schools. Consistently, students were prepared to enter prestigious colleges and to carry a love of learning into their future lives. . . . Throughout the long and rich history of Sacred Heart High School, many Sisters of Charity initiated and nourished all that flourished there.” (The Sisters of Charity of Seton Hill, Volume II, pp. 111-113).

Today, academic excellence still characterizes the students of Oakland Catholic High School who draw their inspiration from both the Sisters of Charity and the Sisters of Mercy who were instrumental in providing young students with educational opportunities and settings that were both challenging and innovative in their time. Let the spirit of intrepid women religious live on!