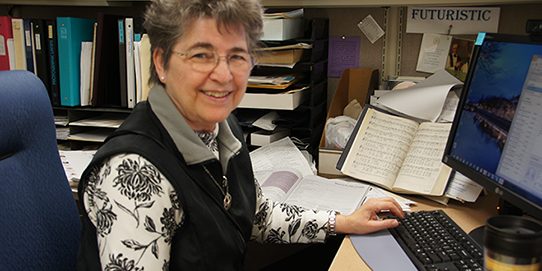 Sister Barbara Ann Smelko, Vocation Coordinator for the Sisters of Charity of Seton Hill, was chosen to participate in a November 28-December 5 pilgrimage sponsored by SHARE El Salvador, a foundation that strengthens solidarity with and among the people of El Salvador and the United States in the struggle for economic sustainability, justice, and human and civil rights. The journey will be made in honor of the 35th anniversary of the women martyrs of El Salvador on December 2, 1980, and Oscar Romero March 24, 1980.

The Leadership Council of Women Religious (LCWR) actively supports the SHARE organization, which provides opportunities for Salvadorans committed to social justice, especially women and girls, to access education, leadership workshops, and technical training. The LCWR board voted to support the 2015 SHARE El Salvador pilgrimage, and encouraged each of the 15 LCWR regions to send delegates as well.

Region IV of LCWR offered scholarships to assist two persons from the Region who would like to attend.  Sister Barbara Ann Smelko applied for one of the scholarships and was accepted. The program will include the pilgrimage to the site of martyrdom of the four women, opportunities to speak with those who knew them, and a visit to the sites of the martyrdom of Archbishop Romero and the Jesuits and their co-workers. Delegates will learn about the root causes of migration to the United States and the current challenges facing impoverished communities. They will visit and lend support to grassroots movements of women, human rights defenders, mothers of the disappeared, and anti-mining and environmental activists. SHARE has led the initiative to declare the site where the four United States churchwomen were martyred a national historic monument. The foundation is working to make this effort come to fruition during the pilgrimage.

Sister Barbara Ann is one of 117 women and men on the journey. The delegation will join Salvadorans for a December 2 commemoration service in honor of the four martyred American churchwomen, Sisters Maura Clarke, M.M., Dorothy Kazel, O.S.U., Ita Ford, M.M., and catechist Jean Donovan. To learn more about the pilgrimage and the El Salvador martyrs, please visit the Global Sisters Report coverage of the event at http://globalsistersreport.org/news/1980-2015-memory-el-salvadors-church-martyrs-lives-34431.

SHARE El Salvador is an international organization founded in 1981 that promotes the development of El Salvador.  Core values of the foundation include women’s empowerment through education, citizen participation in democratic processes, leadership development, and environmental sustainability.  Learn more about SHARE El Salvador at http://www.share-elsalvador.org/about.