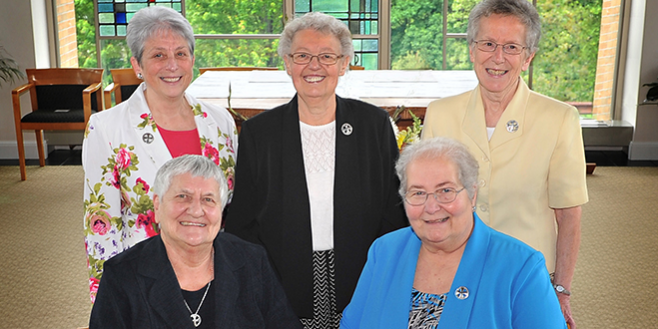 The United States Province of the Sisters of Charity of Seton Hill announces the installation of the 2016-2021 Provincial Council. Members of the United States Province gathered on Sunday, May 22, at Caritas Christi, the congregation’s motherhouse, for a special liturgy that included the ritual of installation. Approximately 300 guests including Sisters of Charity, family, friends, and priests, attended.

During Sister Catherine’s first term as Provincial Superior, two new ministries were established by the Sisters of Charity United States Province. In May 2015, Elizabeth Seton Memory Care Center, a licensed personal care facility specializing in memory care for women, was opened in a secure wing at Caritas Christi. Mary House, a transitional home for women at risk located in Uniontown, Pennsylvania, opened its doors in February 2016 through collaboration with Saint Vincent de Paul Society of Uniontown. Sister Catherine was first elected to the United States Provincial Council in 2007 and served as Councilor and Canonical Treasurer until 2012, when the congregation chose her as the Provincial Superior. Before her election to the Provincial Council, Sister Catherine served as principal of Conn-Area Catholic School, Connellsville, Pennsylvania.

Sister Mary Norbert begins her second term as First Councilor. She was first elected to the Council in 2012 after serving as principal of Saint Mary-Basha School, Chandler, Arizona. Sisters Susan and Barbara were also re-elected to serve as Councilors. Sister Susan has ministered at Mount Saint Peter Parish, New Kensington, Pennsylvania, as coordinator of ministry development. Before her service as Councilor, Sister Barbara was a pastoral associate at Saint Mary Catholic Church, Hudson, Ohio. Sister Colette begins her service on the Provincial Council after thirty-six year ministering as a chaplain and director of pastoral care, serving most recently at Berkshire Medical Center, a community hospital in Western Massachusetts.

The newly elected Provincial Council is responsible for the administration and leadership of the United States Province, which numbers 171 sisters in active or retired ministry. Another 201 sisters serve in the Korean Province.