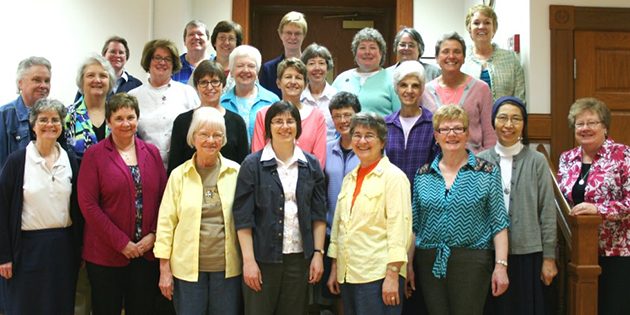 Sisters and Directors of Associates Link Charity with Social Justice

Cincinnati, OH–“Social Justice in a Life of Charity” was the theme of the 2014 annual gathering of the Company of Charity Formation Personnel (CCFP) held April 23-26 at the motherhouse of the Sisters of Charity of Cincinnati, OH.

Eighteen Vocation directors and formation personnel from ten congregations of the Sisters of Charity Federation participated along with five Directors of Associates and seven Leadership liaisons.

Formation personnel and young women in formation from the area were also invited to Sister Simone Campbell’s keynote presentation on religious vows and Catholic social teaching. Based in Washington, D.C., the lawyer and Sister of Social Service is executive director of NETWORK, an American Catholic lobby that educates, organizes and advocates for economic and social transformation.

Sister Julie Cutter, executive director of the SC Federation, also participated in the gathering. She shared highlights of Federation collaborative activities and led participants in discussions around the Federation Strategic Plan.

Representing the Sisters of Charity of Seton Hill at the event were Sisters Mary Ann Winters, Barbara Ann Smelko, and Yong Son Kim.

~Courtesy of Sisters of Charity Federation