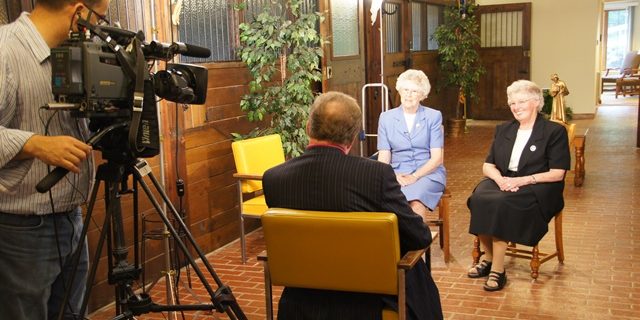 Sisters of Charity of Seton Hill featured on WQED documentary

Greensburg, PA – WQED-TV  aired the premiere broadcast of “Change of Habit” on January 9, 2014. The insightful documentary examines the influence of Catholic Sisters and the diminishing numbers women religious in Western Pennsylvania and the Pittsburgh area. With the knowledge that the median age of Catholic sisters across the United States has reached 70 years, award-winning reporter/producer Michael Bartley and photographer/editor Paul Ruggieri conducted extensive interviews with members of several local religious communities including the Sisters of Charity of Seton Hill, Greensburg; the Sisters of Saint Joseph, Bayden; and the Franciscan Sisters T.O.R. of Steubenville. The interviews help to provide a historical perspective of the past contributions of local sisters and the evolvement of their ministries in recent years. “Changing Habits” ponders how aging orders will survive.  Click here to view the video now on the WQED website.

Life at Caritas Christi during the Quarantine
March 25, 2020