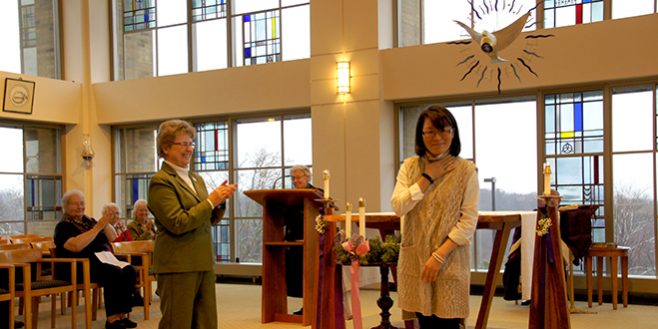 The Sisters of Charity of Seton Hill officially welcomed their new affiliate, Hyeon Lee, after the December 17 morning Mass at Caritas Christi.

The Sisters of Charity of Seton Hill of Greensburg rejoice with deep gratitude that Hyeon Lee has arrived from Seoul, Korea, to be an affiliate of the community. In many ways, she has been part of the congregation for over a year. Last year at this very same time, Hyeon began discerning her vocation as a Sister of Charity during an extensive Advent visit to Greensburg. After her return to Korea, Sister Barbara Ann Smelko has accompanied her on-line and with ongoing telephone conversations, directing her reading, reflection, and prayer from Greensburg. Hyeon has spent much time pursuing her affiliation among the sisters of the Korean Province, who guided her by including her in retreats, classes, and celebrations there, and shared ministry with her at Sunflower House for women and girls in distress. During this time, Hyeon continued her position as faculty member in the psychology department of the Duksung Women’s University, located in Seoul.

Now, with hard-won official immigration papers in hand, and after a journey lasting more than 24 hours, Hyeon has been welcomed into the final stages of her affiliation with our congregation. Hyeon will share life in community, especially with the Sisters of Charity living at Ennis Hall, but we know she will be everywhere among all of the sisters on the complex at Caritas Christi.

Please keep Hyeon in your prayers as she begins her full incorporation into the American Province of the Sisters of Charity of Seton Hill.