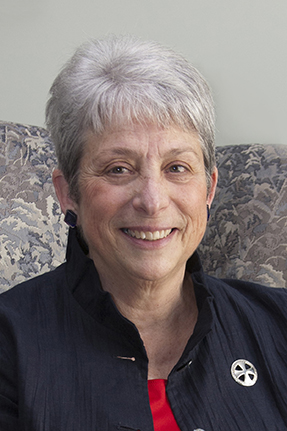 “At age 17, I had no idea just how rich my experience as a woman religious would be,” said Sister Barbara Einloth in reflection on her religious life of 50 years. “Through a life in community, one firmly set within the Church and focused on God’s deepest desires, my spiritual life has been nourished, deepened, and challenged to grow.” Sister Barbara entered the Sisters of Charity of Seton Hill on September 8, 1964, from her home parish, Saint Canice (now Saint John Vianney), Pittsburgh. The Sisters of Charity who taught her at Elizabeth Seton High School and the late Bishop Anthony G. Bosco influenced her vocation choice. Today, Sister Barbara serves the United States Province of the Sisters of Charity as part of a five-woman leadership team, giving particular attention to direction on issues of mission integration, ministry, and social justice. In this office, Sister Barbara joins other members of the Provincial Council in embracing the challenge of leading the province into the future while balancing the mission of the congregation with caring for the growing population of senior sisters. She leads the Guadelupe Conference of the congregation, which consists of the Sisters of Charity who live in Arizona.

Throughout her religious life, Sister Barbara sought to build the Kingdom of God by serving her community and ministering in parishes and schools. Her early ministry years were spent teaching at Saint Jane de Chantel School in Bethesda, Maryland, as well as schools of the Diocese of Pittsburgh that include Saint Mary Magdalene, Saint Stephen, Mon Valley Catholic, Elizabeth Seton and Seton LaSalle High Schools. She also taught adult religious education at Saint Mary of the Mount Parish, Pittsburgh. While serving as Consultant for Adult Catechesis and the Associate Director for Religious Education for the Diocese of Greensburg, Sister Barbara promoted faith education for parish catechists and Catholic school teachers for seven years. From 1990 to 1992, Sister Barbara served in Arizona as a full-time faculty member of Kino Institute, the center for ministry formation and biblical studies serving the Diocese of Phoenix. In that role she taught theology courses in the School of Ministry and traveled to parishes around the diocese offering 12-hour adult education sessions addressing faith, Church and Scripture topics. She then went on to minister at Saint Michael Parish, Olympia, Washington, where in addition to her numerous pastoral responsibilities, she served as an advocate in the parish for the Marriage Tribunal of the Archdiocese of Seattle for a period of five years. In 1997, Sister Barbara returned to Greensburg, where she served the Sisters of Charity of Seton Hill as Secretary of the Congregation for five years.

Sister Barbara’s longest tenure in pastoral ministry was at Saint Mary Parish, Hudson, Ohio.  There she established JustFAITH and JusticeWALKING, which promoted justice education and formation in the Catholic tradition for adults and teens. The programs increased and broadened participation on both advocacy and direct service within the parish. Her efforts were recognized when she was named Woman of the Year for Saint Mary Parish by the Summit Regional Council of Catholic Women in Akron in 2010. Sister Barbara served nine years at Saint Mary Parish before assuming her current role as provincial councilor for the congregation in 2012. “Ministry has put me in touch with wonderful Catholics eager to grow in faith, understanding, and commitment,” related Sister Barbara.

Sister Barbara holds a bachelor’s degree in English with a minor in French from Seton Hill University, a master’s degree in theology from Fordham University, and a certificate in theological studies from Jesuit School of Theology at Berkeley. She has generously used her gifts to serve the province and congregation at large through vocation work as a young sister; writing for the sisters’ publication, Celebration; and through membership on various committees including vocation, formation, and steering committees. She participated with sisters from the United States and Korea in the inaugural Interprovincial Experience of Charism and Mission in Chicago and Ecuador in 2010. In addition, Sister Barbara joined 50 members of the Vincentian family from around the world in Paris for the inaugural Vincentian Family Collaborative Action Project during the summer of 2013. Of her multifaceted experiences of the past 50 years, Sister Barbara marveled, “I am grateful to God for all the aids, opportunities, and surprises offered to me as a Sister of Charity.”

If you would like to make a donation in honor of  Sister Barbara’s Jubilee,
please click on the Donate Now button below.