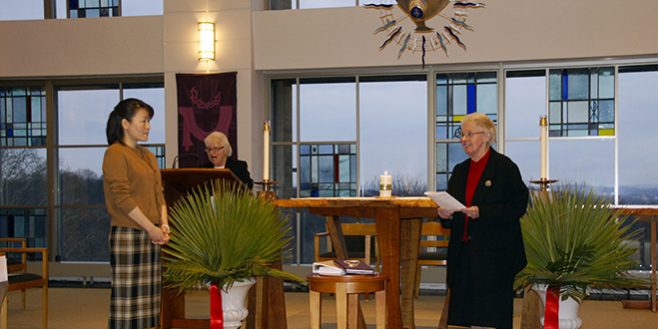 Hyeon Nyeon Lee was formally received into the postulancy of the Sisters of Charity of Seton Hill, U.S. Province on Saturday, March 19, 2016, in the Chapel of the Assumption at Caritas Christi.

Hyeon has completed an affiliation period of directed prayer and study with the Sisters of Charity of Seton Hill, learning about the life of the community, with ten months spent in Korea and another three in the United States. As an affiliate, Hyeon maintained her own lifestyle and commitments during this time of exploration. In Korea she taught university students and volunteered at a shelter for abused women and runaway girls. At the same time, she joined with sisters in the Korean Province for prayer, retreats, celebrations and experiences of community life. After arriving in the United States in December, she lived with the sisters in community and ministered at the motherhouse, primarily working with the elders to assist them and to hear their stories about religious life and ministry. This time confirmed her desire to move toward full membership in the community,

A postulant makes a commitment to live in a Sisters of Charity local community, allowing her to engage in active ministry and experience the life of a Sister of Charity. She is introduced to some of the basic elements of religious life through prayer and study, but primarily she imbibes the spirit of the community through her interaction with the sisters themselves. This first step toward full membership in the congregation, typically lasts one year.

Her faith journey has been a rich experience for Hyeon, who is especially grateful for her experience at a parish in Boston while she was studying there. She became very engaged with the choir and with a prayer group to which she belonged, and celebrated the sacrament of Confirmation within that parish faith community. From that time on, she has been on a quest for where God’s plans were leading. At this point, Hyeon senses that a life of prayer and service with the Sisters of Charity will provide the context for her life’s journey.