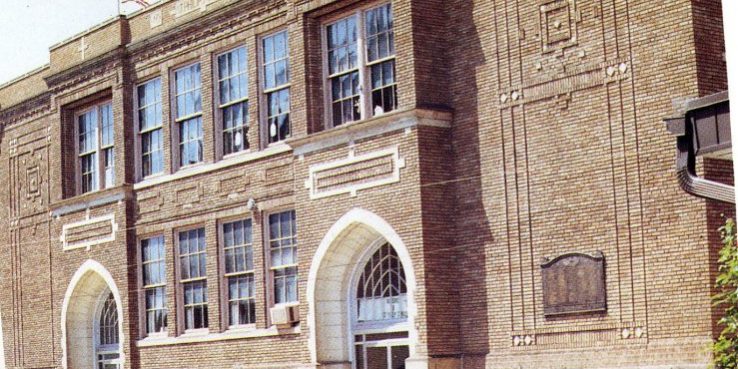 Angels on the Way: St. Philip School in Crafton

Angel Way will not be the same as Saint Philip School begins the 2018-19 school year this August. For the first time since September 1915, there will be no Sister of Charity principal to welcome the students as they pass the Angel Statue on the corner of the drive. Sister Geraldine Marr, the 17th consecutive Sister of Charity principal, bade farewell to the school at the completion of the 2017-18 school year.

The association of the Sisters of Charity of Seton Hill with Saint Philip Parish School in Crafton dates back to October 15, 1885 when Mother Aloysia Lowe accompanied Sister M. Borgia Casey and Sister Mary Austin Akers to staff the small two-room schoolhouse built by Father James Keenoy. The school housed 75 children. The sisters traveled from Southside by train each day, as no convent was available. Sister Thecla Adams replaced Sister Mary Austin after Christmas that year. Sadly, the school closed on May 17, 1891 due to a lack of finances and a slight economic depression.

Father William C. Kelty became pastor in 1898 and on February 6, 1906 Bishop Regis Canevin dedicated a magnificent new Church. By 1915, Father Kelty completed the building of a modern school and convent and requested the return of the Sisters of Charity. In September 1915, the school opened with Sister Benigna Doran as Sister Servant and Principal and ten additional Sisters of Charity to complete the faculty. The school population grew rapidly and Father Kelty erected a second building, including six classrooms, a gymnasium and a bowling alley in 1929.

Since the opening of Saint Philip School in 1915, an Angel Statue has stood at the entrance to the driveway used by students coming and going to classes. Alumni of the school often remember this statue when they reminisce about their days in Saint Philip Elementary School. Sister Geraldine utilized Angel Way and the Angel Statue to design a character development program based on Virtue education, which proved very successful throughout her 22 years as school principal. ANGEL WAY formed the anachronism for Achieving Natural Goodness in Everyday Life.

Alumni members who visited the school in recent days remark about the many things that remind them of earlier times at Saint Philip School They marvel at the marble hallways and some of the classrooms that have weathered years of students passing through the doors. It is clear to those associated with St. Phillip’s that Father Kelty and the early pioneers created a school for the future. Sister Geraldine Marr built on that tradition and brought the school into the next century with her efforts to introduce a strong technology program enhanced with a lived experience of a virtuous Christian life.

Saint Philip School continues to live the Mission as described in the statement below:

“Saint Philp School, rooted in the love of the Heart of Christ, exists to pass on the faith and to teach the Gospel values of Jesus Christ. Saint Philip School is committed to academic excellence and to the development of Christian virtues, which generate responsible character. It endeavors to prepare the student for life now and into the twenty-first century.

The influence of one hundred years of labor by the Sisters of Charity stands out in the Mission Statement, which sounds very much like a paraphrase of Saint Elizabeth Ann Seton’s words regarding education, “always prepare your students for the world in which they are destined to live.”

A bronze plaque will hang on the outside of the school building to commemorate over one hundred years of service of the Sisters of Charity of Seton Hill to the students and people of Saint Philip Parish.

The students of St. Phillip’s will continue to pass by the Angel Statue as the school bell rings, but the influence of the many Angels – Sisters of Charity – who were missioned to this beautiful school in Crafton, will also live on.