You are here:
Archives 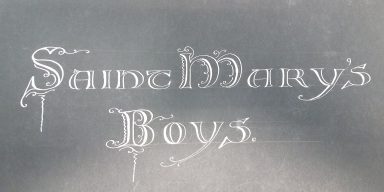 September: The glory of Summer, with her wonderfully hot days and perfectly peaceful nights, beginning to wane. Fall’s cool embrace approaching. It means new clothes and shoes, books, and reuniting with friends. Eager minds (or maybe not so eager) are heading back to school!

The Sisters of Charity of Seton Hill have a long history of educating the youth of western Pennsylvania. One such renowned institution was St. Mary’s School for Boys (1881-1927).

In late 1881, Edward, William, and James McKeever, the three recently orphaned nephews of Reverend Edward M. McKeever, were brought to St. Mary’s Convent in Blairsville, Pennsylvania. Reverend McKeever was pastor in the community and sought aid from the Sisters for the boys, all under the age of five. What else would they do but establish a boarding school for boys?

In its first years in Blairsville, the school was known as St. Mary’s Seminary. Sister Baptista McGivern served as “Angel” of the school in the 1880s.* Sister Baptista wrote of those years in her memoir, “when I recall the little chaps who left comfort and beautiful homes to come to our Mother Hubbard Domicile, I marvel they could have been as happy as they were.” For a time, the young children attended parochial school due to few teachers and lack of adequate educational space. The seminary remained in Blairsville until 1889 when the growing student body and completion of the new motherhouse in Greensburg, Pennsylvania spurred change.

Paired alongside the equally successful St. Joseph’s Academy for Girls, St. Mary’s Seminary would endeavor to “give small boys advantage of moral development and mental culture consistent with their age and capacity” (1910-11). Catholics and non-Catholics alike were accepted into the school. In 1910, tuition and residence cost $250, plus additional fees for use of the library and infirmary. Courses of study included Christian Doctrine, Bible History, Penmanship, Voice Training, Composition, History, Arithmetic, Literature, Geography, Drawing, and Latin. Physical education was also a key element of life at St. Mary’s. The boys regularly played baseball and swam in the lake on the property.

However, the alumni of St. Mary’s recalled great moments of fun during their time at school. One alumni told the story of Sister Marie Vincent’s veiled glee after he hit his first and only homerun on the baseball field. Unfortunately, the homerun also broke a school window! Sister Marie Vincent was only too proud of her young student. The boys had formed a baseball team called St. Mary’s Panthers.

“Trixie is a little dog.

The mascot of St. Mary’s;

And every fellow will agree

He certainly is the berries.

To whom the world means joys

And he’d go almost any place,

If he could see the boys.

He’s into everything about

Because he’s just a little pup

That loves to romp and play.”

The Sisters of Charity made the difficult decision to close St. Mary’s School for Boys in 1927. The building was needed for a Home Economics Department for the expanding Seton Hill College. Nevertheless, the great influence of St. Mary’s and her teachers lived on in the happy memories of its alumni.

In 1931, the 50th anniversary of the founding of St. Mary’s Seminary, the Sisters of Charity organized a reunion for the alumni of the school. The “Old Boys” came back to “The Hill” for several yearly reunions and formed an Alumni Association. The Association produced a regular newsletter called The Saint Mary’s Echo. Of his relationship with fellow alumni and former teachers, Edward McCann wrote (1974), “the love that binds us all together, as we move along through the sunshine and shadow that God wants to cast over our pathways for the reasons of His own, is woven of Heaven’s own material.”

The boys of Saint Mary’s grew into fine young men pursuing careers in the Catholic Church, medicine, law, the military, government, etc. Many of the alumni kept in touch with their “dear Sisters” over the years.

Alumni of the school included

“The Sisters of Old St. Mary’s taught me how to fashion my goals for the years ahead, and how to realize that I was a part of God’s great Plan, traveling through a land filled with many interesting people and endless beautiful things. They took me gently by the arm and pointed to the best of my dreams. And taught me how to reach high to get them.” –Edward McCann to Sister Marie Vincent, 1979

** The Sisters of Charity termed school prefects as “Angels,” referring to Mother Elizabeth Ann Seton’s call to serve as Guardian Angels to children in the community’s care.

-Written by Casey Bowser, Archivist for the Sisters of Charity of Seton Hill